To what extent do toys reinforce gender stereotyping? 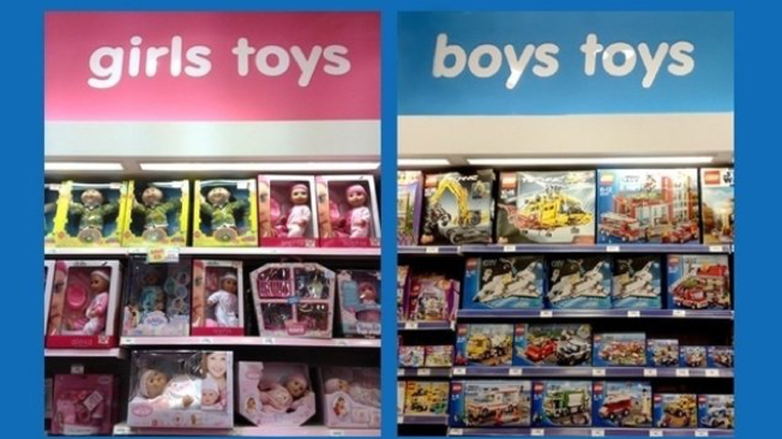 To a considerable degree, toys do reinforce gender stereotyping. Primarily, it is the deliberate colour choices of toys which associate with a specific gender, for example: pink for girls and blue for boys (see figure 1).

This is supported by Pomerleau et al. (1990) who further suggested that the distinctive environment of home has a major influence in encouraging toys that are gender matched to colour. An article by the Fawcett society agreed that a child’s gender stereotype is dictated to them by birth. Furthermore, that it is due to the gender stereotyped marketing of products that are offered to parents.

In addition, the Let Toys Be Toys campaign also criticised the gender stereotyping toy market. They believe that children should have the freedom to decide what toys they want to play with without there being an associated stigma. The campaign further stresses that gender stereotyping restricts children’s play and thus their development. As a consequence of setting these stereotypes at such a young age, this sets children in a direction of inequality from the beginning and can have a great impact in their future life.

Furthermore, Freeman (2007), found that children recognised these stereotypes, when reflected by the parents’ approval/disapproval at children playing with gender stereotyped toys, despite the parents thinking the toys didn’t reinforce gender stereotypes. This emphasises the influence of a child’s home environment on their opinions. Thus, presenting that stereotyping strongly shapes the opinions and behaviour of parents and consequently their children.

To conclude as the evidence suggests, the prevalence of gender stereotyping can be attributed to children’s toys. In my opinion colours of toys generally do gender stereotype, although this may have more to with the parents’ opinions than the children’s preferences.